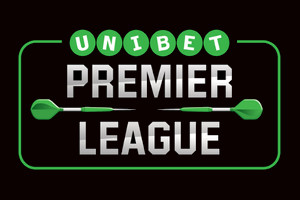 We expected some tight games in week 5 but the PDC Premier League darts continues to throw up surprises. All of the matches with close betting markets ended up being one-sided affairs with James Wade’s 7-0 whitewash of Daryl Gurney being a particularly notable result.

Meanwhile, we did get a draw but it came in the least likely tie of all. Mighty Michael Van Gerwen was held 6-6 by the rank outsider John Henderson who was the latest in a line of players brought in as temporary replacements for Gary Anderson.

For week 6, we head to the Motorpoint Arena in Nottingham so let’s quickly check up on the outright markets before seeing what’s in store on Thursday.

Michael Van Gerwen is now without a win in his last two Premier League outings and the Dutchman has slipped down to third in the table as a result. MVG remains a hot favourite to win the 2019 tournament, however, and you can pick him up at odds of 1/2 with William Hill and 10Bet.

Rob Cross moves into second place in that table on the back of some strong performances and ‘Voltage’ is second favourite at best odds of 8/1 with SportPesa and SportNation. We then come to the biggest mover of all in James Wade who surged to the top of the league following that 7-0 hammering of Daryl Gurney.

Two weeks ago, you could have picked up the left hander at 40/1 and then, last week, that figure halved to 20/1. This time around, The Machine is on offer at best odds of 12/1 with William Hill and Royal Panda and while that could still lead to a nice return, we’ll be kicking ourselves if we ultimately miss out on a 40/1 profit.

Moving through the list, Gerwyn Price is also at 12/1 Unibet while Peter Wright comes in at best odds of 14/1 with BetFred. It’s tight in the middle section where Michael Smith is available at a top price of 18/1 with Coral and 188Bet but then we move out to Mensur Suljovic at a best of 33/1 with Ladbrokes and Betway.

Lastly, Raymond Van Barneveld continues to be written off by the bookies and after losing to Peter Wright last time out, the Dutchman is down at 200/1 with Betway and Royal Panda.

Those are your new prices in the outright winner market so let’s now take a look at the odds for week 6 in Nottingham.

Opening up at the Motorpoint Arena is Michael Smith who takes on Nathan Aspinall. As the latest in a line of replacements for Gary Anderson, it might be easy to write Aspinall off but don’t forget that the Englishman won the UK Open earlier this month, beating Gerwyn Price and Rob Cross along the way.

Smith is having a dreadful run in the Premier League this season but ‘Bully Boy’ remains the favourite here at best odds of 23/20 with Unibet. There will certainly be some interest in Nathan Aspinall at 19/10 with BetFred while the draw could also be an option at 100/30 with Betway.

Next up we have the league leader, James Wade, taking on a lacklustre Mensur Suljovic. Wade is odds on in places and Even Money in others but you can pick up The Machine at best industry odds of 21/20 with SportPesa. Completing this match is the draw which is at that same 100/30 figure with Betway.

Wade is on that roll while Suljovic has started weakly and if we’re basing our decision purely on form, there has to be some value in an odds against price.

Our third game of the evening has an in-form Rob Cross taking on Raymond Van Barneveld who looks to be in serious danger of elimination at the end of the first phase. Voltage Cross has moved up to second in the table and is the clear second favourite and you can back him to win this contest at 4/7 with Coral.

A win for Barney follows on at best odds of 15/4 while the draw is available here at a top price of 9/2 with Unibet and Betway. It would be a shock if RVB were to win based on that wretched run of form but clearly we can’t rule him out.

Match number four in Nottingham puts Gerwyn Price up against Michael Van Gerwen and based on form alone, we can make a good case for the outsider here. Price is available at best odds of 4/1 with William Hill and Ladbrokes while Van Gerwen is out in front at a best of 5/9 with SportPesa. Once again, the draw is quoted at a top price of 9/2 - this time with BetFred.

All of this leaves us with the final showdown of the evening and it sees Daryl Gurney coming up against Peter Wright. This is another game where there will be value in a correct call and with three odds against prices available, Snakebite Wright starts as favourite at best odds of 21/20.

A win for the under pressure Daryl Gurney in this match comes in at a top price of 9/4 with Unibet while the draw, this time, is at 7/2 with Betway.

From witnessing a series of close matches, the Premier League became more open last week with heavy wins for some and lacklustre defeats for others. At the end of it all was that draw between MVG and John Henderson to remind us that anything can happen in darts.

We’ll start this week’s tips with the last game of the night and that 21/20 figure on Peter Wright to beat Daryl Gurney looks a good one. Wright is hardly in the form of his life but Gurney is really struggling and we can’t see him coming back after that 7-0 whitewash by James Wade last week.

Talking of Wade, it’s also surprising that the Machine isn’t odds on to beat Mensur Suljovic. The left hander is the form thrower and that same 21/20 price jumps off the page.

We also expect Michael Van Gerwen to bounce back after two poor weeks by his standards. The odds on figure to beat Gerwyn Price holds no interest however so we’ll back MVG to win by a correct score of 7-4 and that drops in at a generous best of 7/1 with BetFred.