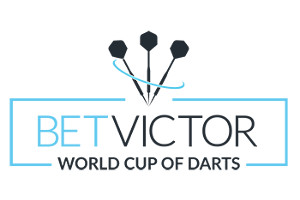 After the fantastic event that is the Premier League Darts came to its conclusion recently in London, the next major tournament in the 2019 Professional Darts Corporation schedule is the PDC World Cup that will be held at the Barclaycard Arena in Hamburg, taking place from Thursday 6th – Sunday 9th June.

The format will consist of 32 countries who will take part in the event, with each team having two players representing their respective nation, and the qualifying players will be determined on current world rankings.

Of those 32 nations, eight countries will have seeded ranking, but the other 24 nations will be thrown straight into the draw, alongside the seeded teams, with all games being as a straight knockout format with all ties taking place over Thursday and Friday.

The Saturday afternoon and evening sessions will see the conclusion of the Second Round Stage over two, best of seven legs format, with a double game – again over seven legs to decide the tie if level at 1-1.

Dutch duo, Michael van Gerwen and Raymond van Barneveld are the current holders of the tournament with a dominating performance over Scotland’s Gary Anderson and Peter Wright in last years’ final. However, the Dutch twosome will not return as a pair this year, due to van Barneveld’s slip down the world rankings. Jermaine Wattimena will fill the big boots of the popular veteran.

So, who will come out on top in this event? The betting market for the tournament is a much more competitive affair in relation to recent years due to the supposed weakness of the Dutch team. Can some of the other leading teams, such as England and Scotland take advantage, or will there be a shock winner on Sunday evening? Read on for our thoughts of the tournament for some betting ideas.

Van Gerwen and Wattimena are the narrow favourites to retain their crown for the Netherlands this weekend. Michael Van Gerwen is back to the top of his form following his recent win in the Premier League Darts event, and with some solid performances in recent months, since the World Championships, those returns have elevated the 30-year-old into undoubtedly the Worlds’ number one player.

MVG will be backed up by his inexperienced partner in Jermaine Wattimena, who has a mediocre tournament success rate at the very highest level in truth. The 23rd ranked player in the world has the best efforts of a last-16 finish in the World Grand Prix and UK Open. Having said that, the Dutch duo are still one of the strongest pairings in the competition, and will be difficult to beat, provided that van Gerwen is in his very best form. For punters who fancy a bet on the Dutch pairing, Black Type go 3/1 on a repeat of the win from last year.

The English pairing of Rob Cross and Michael Smith have endured differing starts to their 2019 season, but will still remain as one of, if not the main threat to the Dutch team. Cross qualified for finals night in the Premier League and ended the tournament as runner-up to Michael van Gerwen.

By contrast, Smith failed in his qualification bid and finished bottom in the Premier League standings. If the English pair are to be successful in this tournament, then Smith needs to return to his form that took the St Helens man to the final of the 2019 World Championship final, which ended in defeat - also to van Gerwen. Ranked 2nd and 6th in the world rankings, England are a formidable force in this tournament and hold solid claims at 16/5.

Scotland have endured two final defeats since the tournament’s inception back in 2010, but 2019 could be their breakthrough year. Gary Anderson will team up with Peter Wright once again – in what will always be a strong team, but their performance has to be taken on trust in this event.

Anderson has been battling back issues in recent months, and they forced the popular Scot to withdraw from the 2019 PDC Premier League, and Wright himself, has had his recent issues with form and changes of equipment. Scotland do possess two of the finest dart players in the world with this duo, if they turn up in form and they could pose a firm threat to the rest of the tournament at 7/2 with William Hill and Betway.

At 7/1 with Ladbrokes and Coral, the Welsh pairing of Gerwyn Price and Jonny Clayton look to be relatively short in the betting in my view. Price has shown marked improvement in recent months, and he is the current holder of the World Matchplay title. Clayton is ranked 16th in the rankings, but he has seldom been involved at the business end of major tournaments. It is likely that the Welsh pair can get to the latter stages, but in terms of winning the event, my belief is that they’ll fall short.

Northern Ireland have Daryl Gurney and Brendan Dolan as their duo, and they could offer more value at 14/1 with SportingBet. Gurney has had a very successful Premier League Darts campaign that culminated in a Semi-Final defeat to Michael van Gerwen (can you see a theme here?) Gurney has now climbed the world rankings, to number 4 and has still to fulfil his true potential. Brendan Dolan is a solid professional, who is capable of throwing in the odd surprise result, both positive and negative. If they click over the weekend, the Northern Irish boys can go far in the tournament.

Finally, Belgium and Australia are the last teams worthy of note, with the pair both available to back at 25/1 with Ladbrokes. The Belgian duo of Kim Huybrechts and Dimitri van den Bergh are a streaky pair of players who can run in and out of form. They have obvious talent, and they should not be underestimated. The Australian duo of Simon Whitlock and Kyle Anderson are also capable of performing to a high standard, but they will probably come up short in truth.

This years’ renewal of the PDC World Cup of Darts is one of the most competitive betting-wise in recent years. Several nations, already mentioned above, have solid claims to the 2019 title. However, England look to be the ones to be on this year.

All of the teams have strengths and weaknesses, but England have the best duo in my view, if every country plays to their potential, and that makes them the bet for me at 16/5. An each-way alternative is thrown in the direction of Northern Ireland at 14/1 with SportingBet, who are a 7/1 shot to make the final.