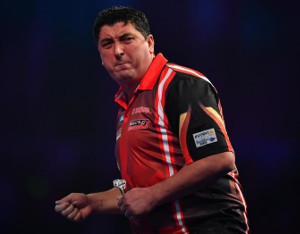 One of the players set to make his debut at the Premier League of darts in 2018 is the Austrian Mensur Suljovic who, despite having failed to progress beyond the last 16 of the PDC World Championships, has emerged to become one of the most consistent players on the circuit.

Like many throwers, Suljovic started life in the BDO and tasted some success before switching to the PDC where he has enjoyed tournament wins. His entry into the Premier League may also make the player a more attractive proposition for those sportsbooks who issue price boost offers at the darts so let’s take a look at some potential options while considering the career of Mensur Suljovic.

Born in Serbia, Suljovic moved to Vienna in 1993 where he learned to play darts at his brother’s cafe. As a natural talent, a move into the professional game seemed a strong option and he joined up with the BDO section in 1999. His first appearance came in the Winmau World Masters where a promising start saw him finish in the last 16.

It was a strong opening but surprisingly, the Austrian only appeared in one BDO World Championship, losing to Vincent van der Voort in the first round of the 2002 renewal. It would take until 2008 before Mensur Suljovic felt ready for a switch to the PDC Code but in the intervening years he had enjoyed some success in the rather unusual discipline of soft tip darts.

A first appearance in the 2008 PDC Worlds saw an early exit in the second round. Similar results followed until 2011 became something of a breakthrough year for the player, reaching the last 16 of the PDC World Championship and knocking out a young Michael Van Gerwen along the way.

In 2014 he reached the quarter final of the UK Open before further progress came in 2015. The highlight of that year came with semi final appearances in the World Grand Prix and the Players Championship Finals while making smaller inroads into other competitions.

In 2016, Suljovic equalled his best performance in the World Championship with a last 16 place before finally claiming his first major victory a year later. That success came in the Champions League as he edged past double world champion Gary Anderson in a tough final.

Another last 16 appearance in the World Championships of 2018 was enough to convince the promoters to make Mensur Suljovic a part of the Premier League in the spring of that same year. So, it looks as though we will be seeing much more of the man they call The Gentle in the months and years that lay ahead.

Here is a record of Mensur Suljovic’s best performances in Major PDC events.

While he is starting to make real inroads as a professional on the main PDC Tour, Mensur Suljovic will still be considered as an outsider for the biggest tournaments on the circuit. At the start of 2018, the Austrian was a best priced 50/1 to win the Premier League of that year and a general 50/1 again to claim the World Championships in 2019.

That could mean that we won’t see too many enhanced odds deals for new customers. These are the types of offers that would take a short, odds on price and boost it up to 25/1 and beyond but because Suljovic will generally start higher than that, they are unlikely to drop in.

However, there should be plenty of regular price boosts involving the player. These are the deals offered by Paddy Power, William Hill, SkyBet, WInner Sports and others and they will typically shift a price by a point or so but the benefit of these is that there are no specific terms beyond the standard rules of the bookmaker in question.

In the case of Mensur Suljovic, these could come in the outright tournament markets or most probably, for result betting in individual matches in which he is involved.

For any player to be included in the Premier League, they must be at the top of their game and Mensur Suljovic is there after a strong showing on the PDC circuit of 2017. We’ll be seeing a lot of the popular Austrian in the near future and we will look to bring you the best of those price deals as they drop in.