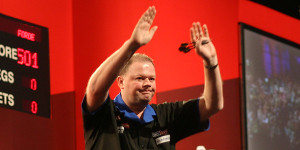 One of the most popular players on the circuit, Dutchman Raymond Van Barneveld is also one of the most successful with multiple World Titles and other major victories behind him. With Phil Taylor having now retired, Barney is one of only a handful of throwers to have started his career before the notorious split in darts came along in 1993.

Despite having the quality to switch to the more lucrative PDC, Van Barneveld opted to stay loyal to the British Darts Organisation and that loyalty was rewarded with World Championship wins in the late 1990’s.

Now a fully committed PDC player, Barney is at the veteran stage of his career but remains a contender in most tournaments in which he features. Bookmakers also make RVB a focus for price boosts and enhanced odds deals so let’s look at those along with a detailed assessment of the career of Raymond Van Barneveld.

Raymond Van Barneveld competed in his very first professional darts tournament in 1984 as a teenager and won his first event, the Rotterdam Open, in the very same year. For the remainder of the decade, Barney continued to pick up minor trophies and having been considered a potential world title winner for a number of years, he took part in his first BDO World Championships in 1991.

He lost in the first round of that competition but as the year progressed he started to make inroads elsewhere and reached the semi final of the Swiss Open. Van Barneveld was active when the notorious split in darts came along in 1993 and as a relatively new player on the circuit, he chose to stay with the lower-key BDO.

More quarter and semi final appearances followed before a breakthrough came in 1995 when he reached the final of the BDO World Championships. Barney lost on that occasion to Richie Burnett but after poor showings in 1996 and 1997, he was back to take his revenge over the Welshman in 1998.

The two men faced each other in the final again where, in what is widely acknowledged as one of the greatest darts games ever, Van Barneveld edged out Burnett by six sets to five.

RVB became one of the few players to successfully defend his world title as he beat Ronnie Baxter by the same 6-5 scoreline a year later and by that point, the Dutchman was a hot favourite for most BDO events.

Rumours of a switch to the more lucrative PDC code were inevitable but while he clearly had the ability to step up, Barney chose to stay loyal to the BDO and the decision paid off. A third world title was claimed in 2005 and while he was a losing finalist a year later, the Dutchman claimed more trophies at this level in the intervening period.

Eventually, after more than 20 years as a BDO player, Van Barneveld felt the need for change and a greater challenge. In February 2006, he therefore announced his intention to finally switch to the PDC.

Success was instant and in his debut year, Barney took the UK Open title and returned a number of high finishes in major tournaments. But the biggest prize of all was just around the corner. Since the turn of the century, only one man has won both the BDO and the PDC world titles and that man is Raymond van Barneveld. The step up was justified as, in 2007, Barney won the PDC version, beating Phil Taylor in a tense final where sudden death was required to close it out with the narrowest of 7-6 scorelines.

In more than ten years since that triumph, RVB hasn’t quite hit the same heights but has continued to pick up trophies at a minor and major level and on his day, he can beat anyone in the game.

Here is a summary of Barney’s best performances at the both the major BDO and PDC tournaments.

It’s been some time since Barney last won a major event and the Dutchman will often start a tournament as fifth or sixth favourite with prices around the 50/1 mark. He’ll often be a very strong odds on option in earlier matches against lower ranked players but will then drift to the outsider’s berth when he takes on the likes of Rob Cross, Michael Van Gerwen and Gary Anderson.

That means we are unlikely to see any Van Barneveld enhanced odds offers for new customers to specific sportsbooks. These are the types of deals that might take the odds on favourite for the tournament and lift his price up to 25/1 and beyond but because Barney already starts very high, he’ll likely miss out on those promotions.

Instead, we should see many Barney price boosts for darts betting and these will be aimed at existing customers where applicable. Paddy Power, Winner Sports, GentingBet and Betway are among those that are most active with these deals and while the price lifts in question are much smaller, the terms involved are less restrictive. For example, there should be no low fixed stake and profits will be paid in cash as opposed to free bet tokens.

Of course, we’re not sure exactly what to expect in terms of Raymond Van Barneveld enhanced odds offers but we will let you know about the best ones as they drop in so keep reading to find out what the future has in store for the popular Dutchman.